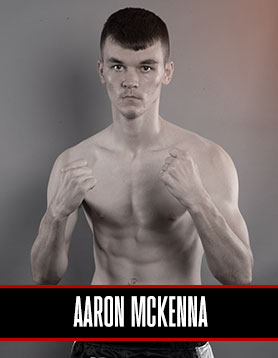 The County Monaghan hot shot has looked sensational since turning pro in December 2017 in Las Vegas.  Campaigning almost exclusively in the United States, McKenna has amassed an immaculate twelve fight record he marks himself out as one of the best young prospects in world boxing.

The UK boxing public would first get to see him in action when he began featuring on Hennessy Sports shows; the first which began in December 2020 when he halted Jordan Grannum – who hadn’t been stopped in 79 fights – with a savage body shot in the second round.

He now joins elder sibling Stevie ‘The Hitman’ under the Hennessy Sports banner. Stevie, who signed almost a year earlier, has since flourished and developing his undefeated record.

Aaron said, “I can’t wait to get started under Mick and I’m really looking forward to a massive future with big plans ahead so I couldn’t be more happier putting pen to paper with Mick.”

“For me fighting regularly, building up my career and reputation is massively important and of course receiving the fantastic exposure which has already made a big difference to me, so signing with Mick at this stage is absolutely brilliant.”

“His reputation is second to none and he has guided so many fighters to world titles so I have total confidence in that he will do the same for me and of course Stevie.  I can’t wait for the day that the both of us are World Champions.”