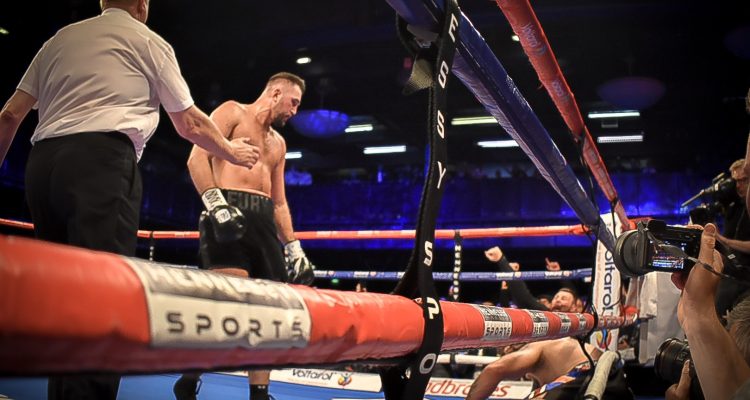 Hennessy Sports is thrilled to announce that Hughie Fury’s stunning fifth round stoppage of Sam Sexton to become British Heavyweight Champion last Saturday night at the Macron Stadium, Premier Suite, in Bolton was a TV ratings hit that reached a total of 2.9mviewers across the night on Channel 5 and 5Spike in the UK.

Sexton v Fury headlined a superb show presented by Hennessy Sports, which was broadcast exclusively live on free-to-air Channel 5, that also included female sensation Savannah Marshall’s second round TKO victory.  A portion of the undercard was televised live on 5Spike earlier in the evening.

Fury, an alum of Channel 5, returned to the TV network where he commenced his professional career and learnt his trade from World Heavyweight Amateur Champion to World Heavyweight title contender and now British Champion.

Promoter Mick Hennessy, who was instrumental in introducing Channel 5 to televising live boxing and the only promoter to consistently deliver the best ratings on the channel, was elated with the figures and said that this demonstrated the public demand for free-to-air boxing on TV.

He said, “I’m absolutely thrilled to again deliver fantastic ratings on Channel 5 and 5Spike with almost three million viewers tuning in to watch the show on the night.  Hughie produced a tremendous performance that ended with a dramatic stoppage that no doubt had viewers on the edge of their seats.  This verified my belief that Hughie would be a huge success on free-to-air TV and we’re delighted to have partnered with Channel 5 and Infinitum.”

If you have not seen the brilliant Knockout from the Sexton v Fury fight watch it again on https://www.my5.tv/live-boxing-fury-vs-sexton/season-1