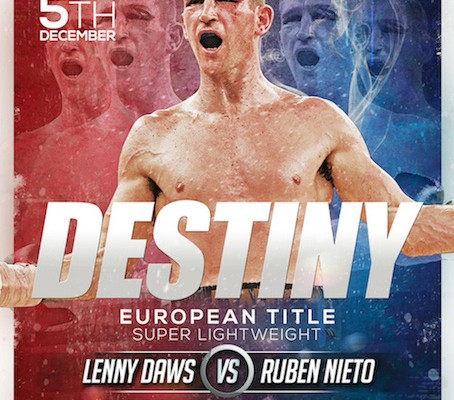 Daws vs. Nieto LIVE on Channel 5

The scheduled 12-rounder will be screened LIVE on Channel 5 as both Daws and Nieto look to become European champion at the second attempt.

“I’m delighted to have this European title fight in my own back yard,” says Daws. “This is the chance I’ve been waiting for and it’s great to not have to travel abroad for it this time.

“In fact, I haven’t boxed this close to home for many years now, so it will be extra special if I can deliver my loyal fans a European championship on December 5. I can’t wait.”

The 36-year-old Daws, 30-3-2 (11 KOs), dropped a highly-contentious decision to former champion Michele Di Rocco in Italy in 2013, but has since bided his time, strung together five wins on the bounce, and now gets a stab at Di Rocco’s recently-vacated belt.

Morden’s Daws has won pretty much everything else on the domestic scene, including two British, an English and Southern Area super-lightweight titles. He also bagged his second EU super-lightweight title in November 2014 with a thrilling tenth-round stoppage win over Frenchman Chaquib Fadli, televised on Channel 5.

All that’s left for Daws to do is win what he feels is rightfully his – the European championship – and then land a shot at a version of the world title in 2016.

Nieto’s motivation is much the same. He too dropped a close decision to Di Rocco when the Italian reigned as European champion, and he too has previously held the EU belt. The Madrid-native also boasts impressive decision wins over Jean Pierre Bauwens and Samuele Esposito and is regarded as one of the best super-lightweights in Europe.

Nieto, 32, holds a record of 16-1 (8 KOs) and, on December 5, will fight outside of Spain for only the second time in his five-and-a-half year pro career.