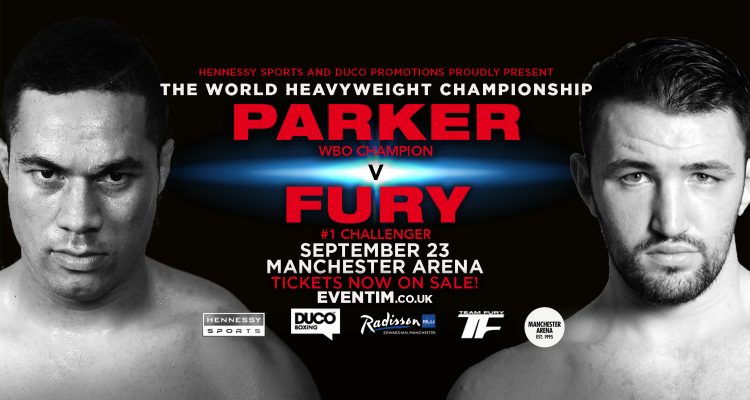 Tickets are now on sale for the massive heavyweight showdown between WBO World Champion Joseph Parker and the mandatory and #1 challenger Hughie Fury.

Manchester hero Fury aims to cap a massive British summer of sport by defeating the steel-fisted New Zealander at the Manchester Arena on Saturday 23rd September and be crowned the new WBO king in front of his home crowd.

Rarely in boxing, especially in the heavyweight division, do you get two young, undefeated and fiercely proud fighters prepared to risk their world title and unbeaten records, but Parker and Fury are prepared to put everything on the line and battle it out in one of the most highly anticipated fights of the year.

History-making Parker, New Zealand’s first ever world heavyweight champion, makes the second defence of the title against Fury and aims to keep intact his immaculate 23-fight record with 8 knockouts and 12 of those inside three rounds.

Fury aims to claim the WBO belt vacated by his cousin, the former Undisputed, Linear and current Ring Magazine World Heavyweight Champion Tyson, and bring it back into the fold of the famous fighting family. With a perfect record of 20 wins and 10 knockouts with 8 coming inside the first three rounds, Fury is hell-bent on becoming the first man to stop the rock-hard Parker.

Parker v Fury will be the headline attraction on a super fight card that will feature further championship title fights and a quality packed undercard with some of Britain’s top up-and-coming talent.