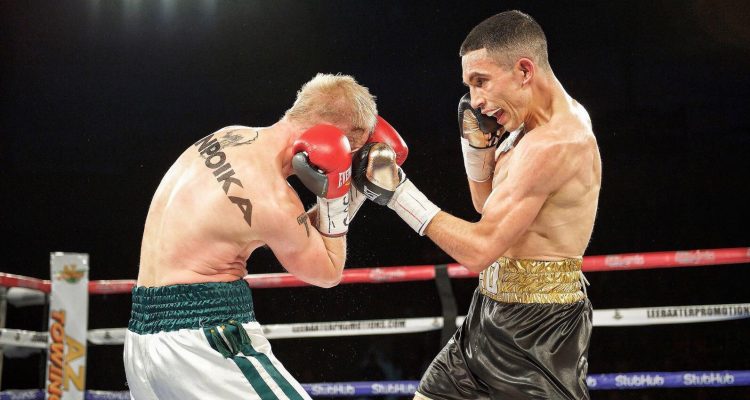 BOLTON, UK (25 September 2019) Britain’s best kept boxing secret until late May, classy Crayford super-featherweight ace Alex Dilmaghani is fast evolving into one of the hottest trends in the ‘hit’ parade as he heads towards his showdown this Saturday (28 September) against dynamite hitting Francisco Fonseca at the Premier Suite, University of Bolton, exclusively live on Channel 5.

Since returning to Blighty following a five-year exile mastering his craft at the fabled Romanza Gym in Mexico City, prime time terrestrial TV slots and glossy spreads in the trade papers have suddenly alerted the cognoscenti of the slick and speedy 28 year old southpaw’s soaring talent and colourful back story.

Latest to seek his testimony were talkSPORT’s Fight Night presenters Adam Catterall and Gareth A.Davies who invited ‘Dilma – who is unbeaten in over eight years ago – to serve as their study guest last week.

The 19-1- 1NC starlet, who has stopped five of his last seven, opened up by explaining the circumstances that led to a Southampton University graduate jetting 5,500 miles to enrol at one of the most savage fight facilities on the planet.

‘Initially, I only went out on holiday, I made great friends out there, a second family. It was only after I finished my degree (2013) that I properly took (boxing) seriously and moved out to Mexico.

‘At Romanza, they were expecting a blond, blue-eyed boy but I looked more Mexican than they did,’ continued the Redhill-born rumbler who served as a spar hand to a stream of world champions, most notably Juan Manuel Marquez, the legendary seven-time, four weight world champion.

‘There, I engrossed myself in the boxing culture. There’s a gym on every corner. Training, sparring, was like a fight. Sparring before (Mexico’s legendary octogenarian Hall of Fame trainer) Nacho Beristain, you’d not want to mess up. He’s very critical, a perfectionist. If you missed a punch, he’d call out ‘You Imbecile. Do it again.’ He never got to call me an imbecile!

‘It was like a university, more like going to school than going to the gym. I learnt my trade; the fundamental principles of the techniques plus the attitudes.

‘In that gym, not only were there world champions but also plenty of hungry guys. As Nacho’s time was limited, we’d all spar heavy, fighting for his attention, trying to impress him. There’s a term, ‘iron sharpens iron’.

‘And they had the best weigh-ins in the business, open air with palm trees in the background. Unbelievable.

‘At the Romanza, I started to change my style. Mexican fight fans don’t appreciate a ‘stand-off’ style. At live events, all the fights are toe-to-toe and if one fighter takes a breather, the crowd starts booing!

‘As a foreigner, fighting out there, I needed to bring it, come forward, adopt a Mexican style, put my shoulder and hips into punches. ‘Nacho’ showed me the techniques. ‘Nacho’ teaches a very unique style to all his guys, different to the other Mexican fighters. He has the lead hand up and the back hand slightly lower….he favours combinations and feints.’

This Saturday, at the White’s Hotel in Bolton, dazzling Dilma gets a golden opportunity to bulldoze his way into the sanctioning bodies’ world rankings when he gambles against Nicaragua’s ultra-violent Fonseca – a 25 year old two-time IBF world title challenger who has sent 19 of the 25 conquests on his ledger down the trap door before the scorecards were called.

The top graders clash from the Vacant WBA International 130lb title but, even if he prevails, Alex informed the radio presenters that he didn’t discount a dip down to featherweight, if the right fights at the right price present themselves.

‘I can make featherweight or super-featherweight, I just want the fights, the money,’ he stresses.

‘Mick (Hennessy, his manager-promoter) offered this fight (date) to plenty of people and you’d not believe how many turned it down, from British champions, European champions, Commonwealth champions. I can’t name, names, that’s for Mick. All were offered the fight but they didn’t want it.

‘But I can make feather. That’s one option. Right now, (more than a week before the fight), I’m 132lbs (9st 6lbs, just two pounds over the super-feather cut-off). I make (super-feather) easy. Boxing’s a lifestyle to me. I don’t have training camps. Training camp is all year round. After a fight I’ll take just a few days off, then I’m back on it.’

Regarding the decision to return to the land of his birth, Dilma informed talkSPORT listeners:

‘England is the number one place for boxing, along with US. The money’s here, the TV’s here. I teamed up with Mick Hennessy. He’s a great guy and we’re doing great things.

‘I’ve got a lot of great friends in Manchester. There’s a lot of educated fight fans there plus some good food places in the food quarter to check out. It’s always a pleasure.

‘Channel Five is the best platform in boxing. The TV figures (for boxing) are unbelievable. And it’s a great card from top to bottom.’

And while this Friday’s South American co-challenger has only conceded to high grade US world champions Gervonta Davis and Tevin Farmer during his 28 fight, six year paid career, when grilled about the lethal hitting Latino, Dilma casually responded:

‘I know he’s going to get beat!