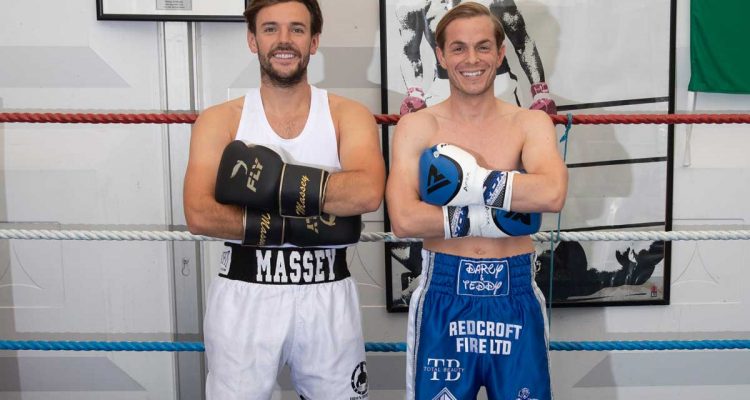 Cantwell puts Massey, winner of the hit reality show in 2016, through brutal training session at the Cantwell Boxing Gym in Eltham so he’s in good shape to the delight of his near 1 million followers on Instagram.

Massey, a former amateur boxer, said, “I’m a massive boxing fan and love the sport.  It’s the best training out there to get fit, toned and for mental health and Sammy has done a great job working on me,”

“I know what he puts me through in training is only a quarter of what he does himself everyday ahead of his title fight and his focus, commitment and determination is really unbelievable to see, I know he can win on the night.”

With a raft of former Love Island stars in pro boxing with the likes of Jack Fincham, Tommy Fury and Idris Virgo – who features on the Cantwell-Little undercard – Massey has no desire to follow in their pro footsteps.

“I did a little amateur boxing when I was younger and had a charity fight a couple of years ago, but there’s no way I’d want to get into that pro ring,”

“Well, if a promoter offered me an extremely obscene amount of money to turn pro then I’d have to give it some serious thought , but with that unlikely, I’m very happy to leave it to Sammy and the others to get on with it!”

Cantwell challenges for his first title and aims to emulate father Mickey,  the popular 90s British Flyweight Champion and four-time World Title Challenger, with a victory over Little.

He said, “I’d like to give Love Island a go, I’ve still got the boy looks and the bod, but my fiancé wouldn’t be too impressed with that!”

“Nathan and the rest of them have lived the life in that sunny villa, compared to me getting punched and battered in a sweaty old gym every day,”

“It’s the glory and pride to lift my first title that makes the sacrifice all worthwhile though.  I saw my dad go through it and it’s motivating me to beat Little.”