Chance to attend Klitschko vs. Fury and meet Tyson Fury 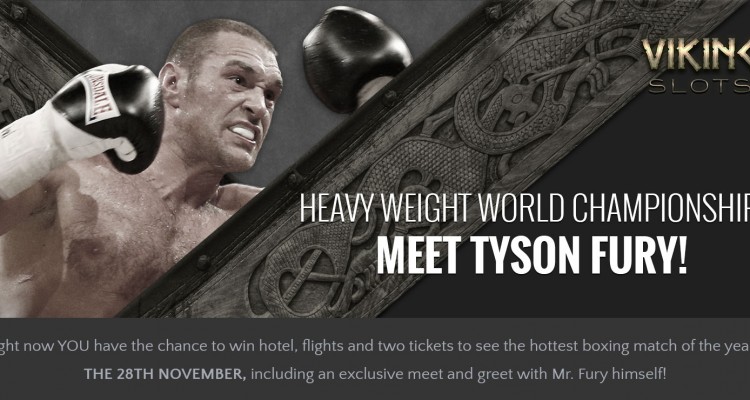 LONDON (6 NOVEMBER) Ever wanted to attend a world heavyweight title fight at a football stadium? Well, here’s your chance.

Visit www.vikingslots.com and make a deposit between November 4 and November 15 for the opportunity to win two tickets, hotel and flights to the much-anticipated heavyweight world championship fight between Wladimir Klitschko and Tyson Fury on November 28 at the ESPRIT arena in Dusseldorf, Germany.

Not only that, the lucky winner will also get the chance to MEET larger-than-life Fury, who hopes to become the new world heavyweight champion by dethroning Klitschko in front of 50,000 fans in Germany.

The WBA, WBO, IBF and IBO world heavyweight title fight between champion Wladimir Klitschko and number one contender Tyson Fury has captured the imagination of the public and is considered one of the standout sporting events of 2015.

Klitschko, the German-based Ukrainian, is unbeaten in over eleven years and has made 18 consecutive defences of the world heavyweight title. Fury, meanwhile, based in Manchester, England, is undefeated in 24 professional fights and has captured English, Irish, British, Commonwealth and European heavyweight titles.