DILMAGHANI-FONSECA – BOOKIES SPLIT DOWN THE MIDDLE 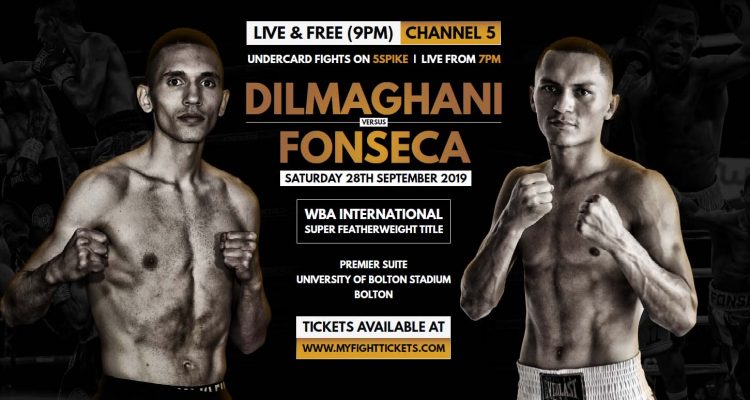 Bolton, UK (27 September 2019) Tomorrow night’s mouthwatering WBA International Super-Featherweight showdown between the silky southpaw smarts of Crayford’s classy Alex Dilmaghani and the atomic hitting of Nicaragua’s Two-Time IBF World Title challenger Francisco Fonseca is a front runner for this season’s most competitive match up and even the bookmakers, those shrewdest of judges, are struggling to split the pair.

The top-class collision headlines the Hennessy Sports event, in association with VIP Boxing Promotions, at the Premier Suite, University of Bolton, exclusively live on free-to-air Channel 5 from 9pm.

Bookies’ Coral and Ladbrokes both have the fight ‘pick ‘em’ at 10/11, while Betway sway marginally with home hope ‘Dilma’, placing the lethal Latino a very live 17/20 nap.

However, for those that sense that the action is unlikely to last the scheduled 12 rounds, heavy hitter Foncesa is the preferred pick with William Hill who offer appetising odds of 7/2 for him to add Dilmaghani to his list of 18 early victims. The Anglo-Iranian, who has culled five of his last seven early, is himself 5-1 to dispense with the judges.

Seldom are these blessed shores with such a high grade, even money international pairing and with Channel Five screening live on free-to-air, there’s no reason to miss out on what promises to be a potential Fight of the Year candidate.

At today’s official weigh-in, Dilmaghani weighed in a shade under the super-featherweight limit at 129.6lb (9st 3lb 10oz), while Fonseca hit the scales lighter at 129.1lb (9st 3lb 1oz).