Hennessy All-Stars In Action At The Coventry Skydome 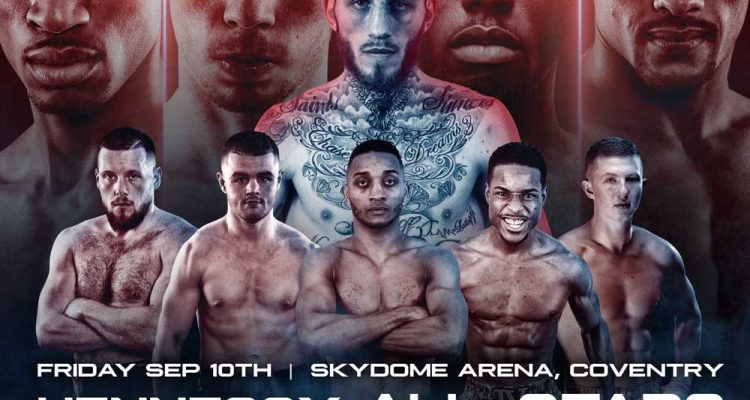 London, UK (30 July 2021) Promoter Mick Hennessy will showcase the brightest boxing talents of his quality packed stable in one mega night of boxing at the Coventry Skydome Arena on Friday 10th September, live and free in the UK and Ireland on Channel 5.

Hennessy’s biggest stars, champions and prospects will get to show off their skills and dynamite punching in front of a live crowd and viewing TV audience as they aim to become British boxing’s next big thing.

Presented by Hennessy Sports in association with William Hill, Infinitum, Numan and Everlast, tickets will start at £40 and go on sale on general sale shortly.

The action packed line up features:

Sam Eggington: Multi-tilted, all-action Eggington won the WBC Silver Middleweight title in a thrilling battle with Carlos Molina in May and picked up a World ranking as he closes in fast on a World title.

Isaac Chamberlain: The Brixton banger makes his highly anticipated return to the ring following career enhancing shoulder surgery which will make him better than ever and is now ready to rock and is back to his big-punching best again.

Stevie McKenna: The Irish dynamo has TNT packed in his fists with all eight out of eight of his opponents KO’d within five rounds. The County Monaghan welterweight terror is gunning for a showdown with English rival Conor Benn next year as he continues leaving a trail of destruction in his wake.

Shakan Pitters: The charismatic Birmingham giant signalled his explosive return to the ring earlier this year with a KO of Jermaine Springer and now looks to regain his mantle as British Light-Heavyweight Champion.

River Wilson Bent: The fast-rising Coventry middleweight hot shot has been hailed as the new Ricky Hatton with his exhilarating knockout style and lifted the roof off the Planet Ice Arena with his KO of George Farrell last time out.

Kaisee Benjamim: Thrilled in his last fight when he floored rival Martin Harkin with a searing body shot in the sixth round and Harkin didn’t come out for the next round. Super skilled Benjamin is shaping up to be a serious threat in the welterweight division.

Idris Virgo: The Love Island star is proving to be the real deal as he continues on the road to his first title fight. With a physique carved out of rock, the flash and brash Birmingham super- middleweight ace has backed everything up so far.

Brett McGinty: The sensational Ricky Hatton trained, Donegal super-welterweight, and former amateur standout talent is unbeaten in two fights and is showing signs of becoming a force to be reckoned with as he developes.

Tommy Welch: The Brighton heavyweight star and former amateur sensation brings hell every time he fights and he doesn’t hang about with all three of his fights ending by KO inside two rounds.

Michael Hennessy Jr.: A former top amateur with a wealth of experience, the stylish Sevenoaks super-welterweight is looking better and better each time with some eye-catching combinations to head and body as looks to stamp his mark in the pro game.

Hennessy was the first boxing promoter to open the doors to the public in May at the Coventry Skydome Arena and the allocated tickets – put on sale just five days before the show – sold out within minutes and the action starved fight fans were given to a fistic treat.

This time the Coventry Skydome Arena will be open to full capacity on Friday 10th September and Hennessy is promising a night of entertainment that they won’t forget.

He said, “This is a real boxing bonanza of a card for the fight fans. After a very tough time that everyone has had, this is a show for the fans where they can come out and enjoy the fights, see the Hennessy Sports stable of champions from Sam, Kaisee, River, the return of Isaac, Shakan on his comeback, and our exciting future of young talents like Stevie, Idris, Brett, Tommy and Michael all showcasing their skills. The breadth of talent across the weight divisions is just incredible and shows the strength of British and Irish boxing as they look to shine on this massive night. There will be real entertaining, fifty-fifty, fights throughout the card to savour so don’t miss this one.”

The full card will be announced in the coming weeks.

Tickets will go on sale shortly and are expected to sell out fast so keep a close eye on Hennessy Sports social media accounts for more announcements.