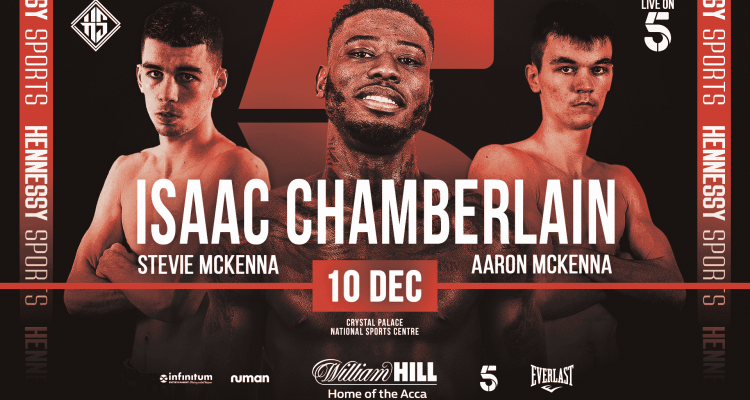 On Friday 10th of December Isaac Chamberlain headlines a stacked card in South London alongside Irish sensations, Stevie & Aaron McKenna who are both in title fights. The fight is live & exclusive on Channel 5. Catch the undercard first on the Hennessy Sports YouTube channel.

Back in front of his local fans, Isaac is looking to put on a knockout performance as he aims to get a world title shot in 2022.

Chamberlain made his long awaited ring return earlier this year, after recovering from a shoulder injury when he overcame Ben Thomas in Coventry.

Next time out the 27-year-old will have the chance to register his 14th win as a professional, whilst picking up the IBF International title in the process.

Elsewhere, Aaron McKenna will be looking to continue his impressive run of form and extend his record to 14-0 with a win in the capital when he challenges for a world youth title.

Earlier this month Aaron’s brother, Stevie, put in a dominant display in the Midlands when he dispatched Richmond Djarbeng by knockout.

He joins his sibling on the card next month, where he has the chance to claim a world youth title.

Presented by Hennessy Sports in association with William Hill, Infinitum, Numan and Everlast, ticketsare priced at£50 and £120 and are available from the below: