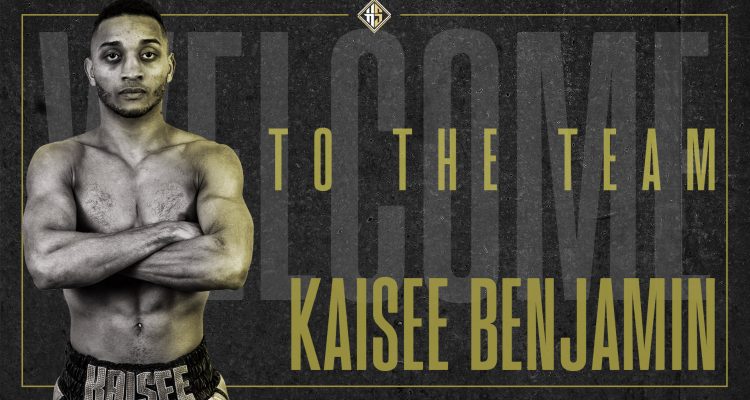 London, UK (9 June 2021) Promoter Mick Hennessy is delighted to announce that he has signed the fast-rising Birmingham hot-shot Kaisee Benjamin to a long-term promotional agreement as he closes in on a British Welterweight title shot.

The 25-year-old is primed and ready for his opportunity at the Lonsdale belt following his career best win over rugged Scotsman Martin Harkin last month in their official eliminator showdown at the Coventry Skydome Arena.

Benjamin heavily dropped Harkin with a searing right hook to the ribs in the final seconds of the seventh round that sent him to one knee, but no count was given.  Harkin wisely remained on his stool and didn’t come out for the eighth round.

Harkin’s sole loss on his record was on points in his previous fight to the now WBO #4 world ranked and WBO Global Champion Michael McKinson last October which shows the sheer quality of Benjamin to force Harkin to quit.

Renowned for his silky skills and boxing ability, Benjamin knows that he can outbox his opponents easily, but his manager Jon Pegg and trainer Louie Counihan have been heavily stressing on him the need to inject more spitefulness in his punches and start knocking opponents out.

The words have sunk in and Benjamin showed just what he can do when he flicks on the nasty switch which impressed Hennessy and the huge viewing audience on free-to-air Channel 5.

Benjamin, who has 12 wins under his belt, holds the Midlands Area title, but now with Hennessy’s promotional power behind him he will be thrusted towards challenging for the British title currently held by Chris Jenkins, who is due to defend against Ekow Essuman shortly.

“It’s fantastic to sign a promotional deal with Mick and to finally graduate from the small hall shows to now featuring on the big arena shows,” Said Benjamin.

“It’s a big step up for me and means more terrestrial TV exposure on Channel 5, but I’m ready to impress and the next step for me is challenging for the British title. I want that beautiful Lonsdale belt around my waist,”

“I knew that the Harkin fight was a massive opportunity to show just what I can do in front of Mick and the Channel 5 audience and I went out a proved it,”

“Harkin had only lost once previously on points to Michael McKinson, who’s now ranked number four in the world by the WBO, and for me to go out and stop Harkin was a real turning point in my career, it’s a huge win and big statement,”

“I needed the pressure of stepping up to perform and I feel that I showed that, but there is so much more to come from me, just wait and see,”

“With Mick now fully behind me and backing me, my great training team of Jon and Louie, I feel that I can go on and fully achieve my potential and dreams.”

Welcoming Benjamin to the prestigious, talent packed Hennessy Sports team, Hennessy said, “I’ve been really impressed with Kaisee, especially with his win over Harkin last time out, and I’m thrilled to have him fighting under our banner,”

“Jon and Louie have worked very hard bringing Kaisee through and the way he stepped up and dealt with Harkin, who had never been stopped, was a real eye opener for me and showed me that he is a top quality fighter,”

“Here’s a guy who has been the B-side on other promoters shows, has fought in the away corner, yet he’s picked up some very big wins and I really admire that in him,”

“He’s in line to fight for the British title and we’ll see what the outcome is between Jenkins and Essuman, but in the meantime he could look to challenge for the English title,”

Pegg added “I’m over the moon for Kaisee to take his career to the next level with Mick.  He knew the importance of the Harkin fight and what it would mean if he won in style and subsequently, he went out a did a number on him.  He knows what he needs to do now and we’ll be seeing a new, more devastating Kaisee, who’ll be a real threat to any welters out there.”