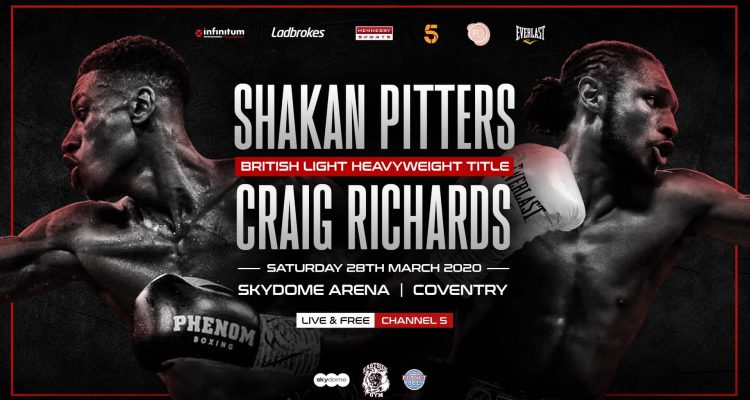 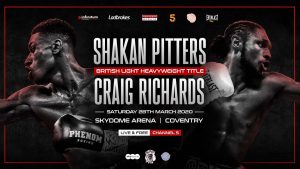 London, UK (28 January 2020) Promoter Mick Hennessy brings big-time boxing back to Coventry at the Sky Dome for the first time in a decade with an exciting clash between bitter rivals Shakan Pitters and Craig Richards for the Vacant British Light-Heavyweight Championship on Saturday 28th March, exclusively live on free-to-air Channel 5.

Presented by Hennessy Sports in association with Ladbrokes, Channel 5, Infinitum, Everlast and Jon Pegg, tickets will be priced at Standard £40, Ringside £70, Inner Ringside £100. An on-sale date and full ticket details will be announced shortly.

The Sky Dome was a boxing hotbed in the early to mid 2000s with a host of popular local boxers, including Neil Simpson, Dean Pithie, Richard Evatt, Steven Bendall and Andy Halder all featuring in glorious fight nights at the venue.

With the last championship boxing event staged there almost 10 years’ ago – Leicester’s Rendall Munroe in a WBC World Super-Bantamweight title eliminator in April 2010 – and with Coventry leading up to its year as 2021 City of Culture, Hennessy felt it was the ideal time and location to bring boxing back and stage one of the most eagerly anticipated fights in British boxing.

Since the British title was vacated by Joshua Buatsi and the British Boxing Board of Control announced purse bids for Pitters v Richards – which were won by Hennessy – the the showdown has got the British fight trade divided.  It’s a real 50-50 encounter with both fighters evenly matched and with plenty of pride at stake, neither man will want to come second in this crucial 175lb clash.

The towering 6ft 6in Pitters, 30, hasn’t put a foot wrong since making his pro-debut in March 2017 and has amassed a perfect unbeaten 13-fight career with four knockouts.  The Birmingham talent first came to attention when he cruised through the Ultimate Boxxer 2 tournament in November 2018, defeating Dec Spelman, Georgii Bacon and Sam Smith all in one night to win the Golden Robe.  In ‘Shaks’ last fight in September he again faced Spelman, who by then had become the English champion, and relieved him of the title in a thrilling 10-round war where he had to overcome some tricky moments to emerge the winner on the scorecards.

Pitters said, “I’m not like any of the guys he’s faced before.  He keeps going on about Andre Sterling, Jake Ball and Frank Buglioni, he just living off those names.  I can’t wait until I get in the ring with him and find out how adaptable he is, then he’ll realise how good I am.  It doesn’t matter where the fight is taking place, I don’t care where the fight is, the result will always be the same, I will win.  I’m the better boxer and he’s going to find that out.  He goes on about me being hurt against Dec Spelman, but I proved I had a great chin.  His last fight against Chad Sugden was awful, if that was me in with Sugden he would have been out of there.  For me the fight doesn’t go the distance and I want to know what his excuse is going to be when he loses.”

Richards, 29, from Crystal Palace, has built a solid record in his five years as a professional.  He’s captured the Southern Area Super-Middleweight title and the WBA Continental Light-Heavyweight title in his 17-fight career.  This will be Richards second shot at the British Light-Heavyweight title after his points loss to then Champion Frank Buglioni in October 2017 at the Principality Stadium on an Anthony Joshua card.  Richards took the fight at just five days’ notice after original opponent Callum Johnson withdrew, but he took the fight to Buglioni and at one point in the third round he looked like he was going to cause a huge upset.  Since then ‘Spider’ has remained unbeaten in six fights, although his last fight was scored a surprised draw to Chad Sugden.

Richards said, “Pitters is not ready to challenge for the British title, he should have defended the English and then fought an eliminator to prove he’s ready.  People are getting carried away with him.  Just take a look at his record, his four knockouts have been against a guy who lost 72 fights; someone who only had three fights; another one with 29 losses and someone making his debut.  He was badly hurt in his last fight against Spelman.  Is the fight taking place in Coventry to give him some kind of advantage? It will work against him and the pressure will all be on him.  I’ve fought on an Anthony Joshua show in front of 86,000 people against Frank Buglioni for the British title at just five days notice.  Fighting in Coventry means nothing to me.  It won’t go the distance unless he gets on his bike for twelve rounds.  When I hit him on the chin and he lands on Big Ben he’ll wish the fight would have taken place in London.”

Also on the card will be exciting middleweight prospect Michael Hennessy Jr. from Sevenoaks, Kent, in his fifth professional bout in a six round contest.

Hennessy is thrilled to deliver the fight to the fans and for viewers live on Channel 5 and is expecting a memorable encounter between Pitters and Richards. He said, “It was a fight that really appealed to me when the purse bids were announced by the Board and I’m delighted to have won the rights to stage it. The once popular fight city of Coventry has been bereft of professional championship boxing for nearly 10 years and I felt that it was the ideal venue to host this cracking British title fight and bring boxing back once again and it will also be live on free-to-air TV on Channel 5. It’s a real 50-50 fight and has split the trade on who will win this one. Shakan is undefeated, skilful and with the physical advantages, but is facing his first big test and if he comes through he will really launch himself on the big stage. While Richards has the edge in experience having challenged for the British title before he is also highly regarded and skilled boxer, he’ll be hungry to get the victory over his rival. This has the makings of a great fight between the fierce rivals with plenty of pride on the line.”