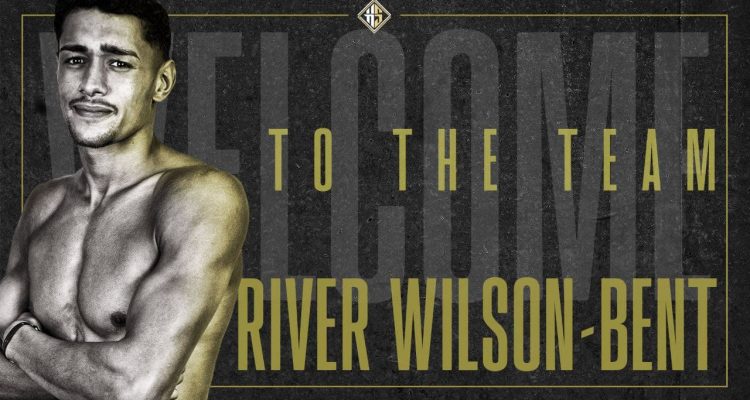 London, UK (4 June 2021) One of British boxing’s most exciting and hard-hitting talents, River Wilson-Bent, has signed a long-term promotional agreement with top promoter Mick Hennessy as he embarks on the next stage of his career.

The unbeaten Coventry sensation put pen to paper following his pulsating stoppage victory over George Farrell last month that was televised on free-to-air Channel 5 in the UK after headliner Sam Eggington’s win over Carlos Molina to claim the WBC Silver Middleweight title.

Bent, the current Midlands Area Middleweight Champion, joins an eclectic stable of fighters under the Hennessy Sports banner and the all-action 27-year-old will have his first fight under the new deal when he returns to the Coventry Skydome Arena on July 17 with full event details to be announced shortly.

Bent said, “To sign with a premier promoter like Mick Hennessy is a dream come true for me,”

“I’m thrilled to join the buzzing Hennessy Sports team and Channel 5 with top names likes Sam, Isaac, Stevie and Shakan, plus the other up-and-coming lads under the banner,”

“It’s been a dream of mine since I was a kid to one day have a top promoter backing me and I’m so happy to have someone like Mick whose experience, knowledge and guidance will steer me to the top.  I know that my career is in safe hands.”

“Short term, my goal is to fight for the English title and then work my way up the domestic rankings with my opponents and experience improving each time and then I know I’ll be ready to fight for the British title.  Longer term, I want the World title and to be called a World Champion, that’s my dream.  With Mick’s backing the possibilities are endless.”

The 6ft 2in puncher from Exhall is undefeated in nine fights with five knockouts and his last three fights have ended in stoppages which have made the public and pundits sit up and start to take notice of the fast emerging 27-year-old.

Against unbeaten Farrell, Bent produced a career best performance in the first defence of his Midlands Area title to stop the gutsy Farrell in the seventh round.  Last December he obliterated undefeated Troy Coleman with a pulverising right hand to win the Midlands Area crown and prior to that he stopped durable veteran Alistair Warren in five rounds.

Remarkably, Bent holds down his day job as a roofer alongside his boxing training and is a working class hero to his large and loyal followers’ who turn out in their droves to see him in action.

He could have sold hundreds of tickets over his allotted allocation for the Farrell fight, but was limited due to Government Covid-19 regulations and is hopeful that further restrictions will be lifted shortly so all his fans can get to watch him again.

Bent added, “My fans are absolutely crazy, it’s a real great feeling knowing that you’re coming out into the arena with your fanbase cheering you on, it really spurs me on to victory,”

“I really missed them for the Coleman fight when no fans could come in, but I gave them something explosive to watch back at home on Channel 5 with the knockout,”

“Then for the last fight against Farrell, things were a lot better with a small allocation of about 150 were allowed in but they made such a racket when I fought it felt like it was a full house so hopefully we can pack the arena out some more on July 17.”

Hennessy, who has been a professional TV promoter for almost two decades and has developed countless talents including world champions and mainstream stars Tyson Fury and Carl Froch, is excited to be guiding Bent.

“I really get a buzz out of unearthing talented boxers from grassroots and developing them into champions and stars,” Said Hennessy.

“River really excites me and I can see the vast potential in him which is why I wanted to sign him.  He’s featured on my last two shows and each time he has impressed me with me his explosive and exciting performances,”

“I don’t sign up a lot of fighters but the ones that I do sign I firmly believe in them and back them all the way, one hundred percent, and I know with River he has the promise to reach the very top.”

Renowned Midlands fight figure Jon Pegg, Bent’s manager, is delighted for his man who he believes grasped his opportunities with both hands and is now seeing the rewards.

He said, “River was handed an opportunity by Mick against an unbeaten fighter in Coleman, he knocked him out and on the strength of that was given a further opportunity against the unbeaten Farrell and stopped him as well and has been rewarded with a promotional deal.  It’s a great example for any young fighters out there to take the chances you’re given.  I’m over the moon for him and I know that he’ll just get better and better with Mick and Channel 5 pushing him.”