The McKenna Brothers feature on same show for the first time 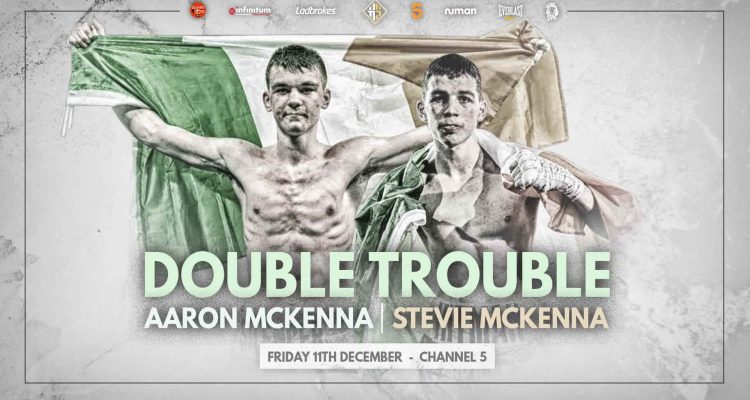 London, UK (17 November 2020) Red-hot Irish boxing siblings Stevie and Aaron McKenna will both fight on the same show for the first time as professionals when they appear on promoter Mick Hennessy’s event on Friday 11th December.

The unbeaten baby-faced brothers are ready to bring excitement and knockouts when they feature in separate six-round contests on the undercard of the crunch clash between Sam Eggington and Ashley Theophane, exclusively live on free-to-air Channel 5 in the UK.

Stevie, 23, made his first appearance for Hennessy Sports back in September on the Alex Dilmaghani-Samir Ziani undercard in his last fight and made an immediate impact with his devastating firepower by flooring Gary McGuire three times before the referee called a halt at just 1:13 of the first round.

He’ll return to the ring again just seven days later when he features on another Hennessy show on Friday 18th December headlined by the mouthwatering British Light-Heavyweight title showdown between Shakan Pitters and Craig Richards, also live on Channel 5.

Known as ‘The Hitman’, the 6ft super-lightweight hot shot from Monaghan, County Monaghan, has lived up to his nickname with all five of his opponents knocked out and he hasn’t wasted any time – four taken out in the opening round and one lasting until the second in only six-rounds of action.

Stevie said, “I’m thrilled to be fighting on Channel 5 again and it was amazing exposure for me where everyone could watch me for free.  From beginning to end the experience was first class.  Thanks to Hennessy Sports for the opportunity.  I hope people watching enjoyed it last time, I put on an explosive performance.  I can’t wait to deliver more on December 11th.”

This time Stevie brings with him super-welterweight Aaron, 21, who appears on the show courtesy of his promoter Oscar De La Hoya, and follows in his older brother’s footsteps by having his first fight on UK soil.

Aaron has slightly more experience with an unbeaten 10-fight record and six going early – five of those coming inside two rounds – with 31 rounds of action under his belt.  Going under ‘The Silencer’ moniker, the 6’ 1” talent from Smithborough, County Monaghan is looking forward to his UK debut.

“It was great news from Golden Boy Promotions that they have secured a slot for me on the Hennessy Sports fight night on December 11th.” Said Aaron.  “I’d like to thank Mick Hennessy for allowing me to fight and showcase my skills. Its great to get a fight before the end of the year and I am eagerly looking forward to putting on a show for my fans here in the UK and Ireland. The stage is now set for me and my brother Stephen to fight on the same card and we intend to produce the fireworks. Thanks to Golden Boy Promotions for granting me this opportunity.”

The all-action brothers are managed by Ken Sheer and trained by the legendary Freddie Roach at the Wildcard gym in Los Angeles.  Both are currently in Ireland training with their father Fergal during the pandemic and they’ll return to Roach when travel restrictions are lifted.

Promoter Hennessy is thrilled to have Stevie back again and welcomes Aaron for the first time.  Hennessy has family throughout Ireland and very close links to the boxing scene and his son Michael boxed out of the acclaimed St Monica’s Club in Newry as an amateur.  Having watched both Stevie and Aaron from a young age and knowing Fergal, Hennessy was keen to work with the team.

“Stevie made such a great impression last time with his performance which was clinical, explosive and very quick, I’ve received hundreds of messages from fans who watched on Channel 5 and were left craving to see more of him!” Said Hennessy.  “It’s fantastic to have Stevie on the show again and so quickly again on the 18 December, but I’m really excited to welcome his equally talented brother Aaron on the card – double the value!  Thanks to Fergal, Oscar and Ken Sheer of Sheer Sports Management for making this happen and we look forward to seeing Stevie and Aaron in action next month.”