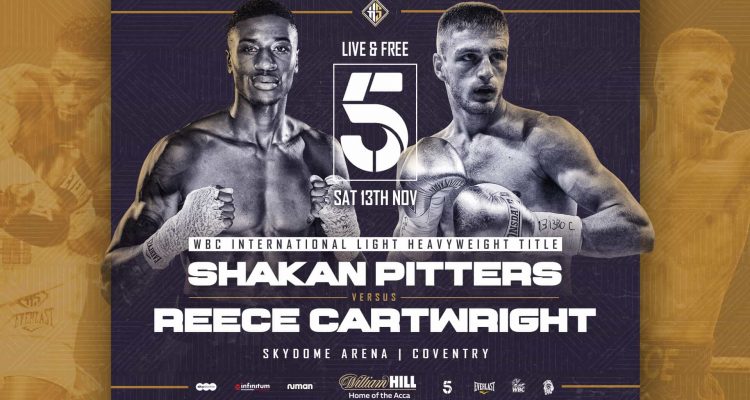 Coventry, UK (16 October 2021) Promoter Mick Hennessy will stage a triple-header thriller on Saturday 13th November at the Coventry Skydome Arena featuring stars Shakan Pitters, River Wilson-Bent and Aaron McKenna in Championship action plus his stable of Hennessy All Stars, exclusively live and free on Channel 5 in the UK and Ireland.

Presented by Hennessy Sports in association with William Hill, Infinitum, Numan and Everlast, tickets are priced at £45, £55, £90 and £120 and an on-sale announcement will be made next week.

Hennessy returns to the Skydome after staging the thrilling Sam Eggington-Bilel Jkitou all-out war last month that has been hailed as the best fight on these shores in recent memory.   Whilst that fight will be very hard to top, the top line up of talent will look to bring their own brand of entertainment on the night.

‘Big Shak’ receives a golden opportunity to get a belt around his waist again after losing his Lonsdale belt to Craig Richards in a thriller last December.  Pitters has returned with two solid wins since against Jermaine Springer and Farouk Daku and will be looking to show the vast improvements from the Richards fight and make a big statement in claiming the crown.

Cartwright presents a real threat to Pitters’ ambition, the former IBF Youth Middleweight Champion has won his last three fights by KO and he’ll be aiming for a standout win over Pitters and show that he is the real deal in the competitive light-heavyweight ranks.

In an explosive Midlands derby showdown, Coventry hot-shot River Wilson-Bent (10-0-0, 5) will face off against Rowley Regis rival Tyler Denny (13-2-2) for the Vacant English Middleweight Championship.  Hammer-fisted Bent, the former Midlands Area Champion, has KO’d three out of the last four opponents and is high on confidence as he heads into the crunch clash.

Southpaw Denny aims for second time lucky with a follow up shot at the English title after losing out to Linus Udofia in November 2019 on a very close points decision.  In his last fight in June this year he had a standout win when he took the unbeaten record of Ultimate Boxxer winner Derrick Osaze on a points decision.

Red hot Irish middleweight sensation Aaron ‘The Silencer’ McKenna (12-0-0, 7) will return to action on the card and follows up his complete shut-out victory over Ivica Gogosevic last month.  Hennessy will shortly announce some big and exciting news about Aaron’s fight on the show that will see him challenge for his first championship title.

Aaron’s joins older brother Stevie ‘The Hitman’ McKenna (9-0-0, 8) who is lighting up the welterweight division with his dynamic and KO performances.   The 24-year-old completely outboxed Moussa Gary last month to win every round of their six-rounder and is now within touching distance of his first championship belt.  McKenna continues to build momentum towards a massive clash against British rival Conor Benn that the County Monaghan ace wants next year.

The rest of the Hennessy All Stars team will be out in full force starting with Brixton cruiserweight ace Isaac Chamberlain (13-1-0, 7) who continues his comeback after his first round win last month against Ben Thomas.  It was Chamberlain’s first fight since career enhancing shoulder surgery earlier this year and a victory for the IC will line him up for a potential title challenge in December.  The domestic cruiserweight division is looking vibrant and Chamberlain aims to become the world’s best.

Kaisee Benjamin (13-1-1, 4) has turned bodysnatcher after halting his last two opponents with rib-crunching body shots as he intensifies his campaign towards a British title shot.  The Birmingham banger KO’d Jarkko Putkonen in the third round last month and prior to that Martin Harkin in May in the seventh.

Promoter Mick Hennessy said, “What a fantastic card we return to the Coventry Skydome Arena with and it’s stacked from top to bottom with all our best prospects and champions in waiting.  As Coventry is this year’s City of Culture, we’re proud to have put the city on the sporting map with such a fabulous fight night at the Skydome last month with Eggington against Jkitou in the Fight of the Year.  All the boxers on the card have a lot to live up now after that fight, but I’m confident they will all deliver.”